Macroeconomic factors which shaped the national economy in 2018.

In 2018 private consumption continued to be the main GDP growth factor; it stimulated the increase in wages and salaries, which remained high, and optimistic consumer moods. During the year, investments became the second growth engine, including mainly public investment projects financed with increased use of EU funds. Polish exports remained strong, despite the slowing of global trade. Poland’s importance as a services exporter grew.

The unemployment rate registered in December 2018 dropped to 5.8% y/y compared with 6.6% y/y at the end of 2017. In the second half of the year unemployment stopped dropping, which should be associated with the lack of appropriately qualified employees and slower increase in demand for work. The same factors contributed to the deceleration of the rate of increase in employment. Despite the problems with finding staff notified by enterprises, the rate of growth of wages and salaries in the enterprise sector in 2018 remained relatively stable and oscillated around 7% y/y. As at the end of 2018 average remuneration in the enterprise sector exceeded the threshold of PLN 5 000, gross, for the first time in history.

Inflation below the NBP target

Despite robust economic growth, in 2018 CPI remained below NBP inflation target (2.5% y/y), and in November it dropped below the floor of the allowable target deviations bracket (1.5%). Average annual inflation amounted to 1.6% compared with 2.0% in 2017. The key source of fluctuations in CPI were the food and fuel prices. Base inflation (after eliminating food and fuel prices) was low and stable (it did not exceed 1.0% y/y). Therefore, in 2018 the relatively high increase in wages and salaries did not translate into an increase in consumer prices.

Improvement in the public finances condition

In 2018 the condition of the State budget was record good. The State budget noted a surplus since November, and at the end of the year the deficit was probably around PLN 10–11 billion (compared with PLN 41.5 billion stipulated in the Budget Act). The budget result was supported by the cyclical increase in budget income, sealing the tax system and stabilizing expenses. The increase in wages and salaries, and in employment (including legalizing foreigners’ stay in Poland) increased inflows to the Social Insurance Fund, which allowed the Fund to give up PLN 11 billion of subsidies from the State budget, which additionally improved the budget results at State level. After Q3 2018 the deficit of the public finance sector dropped to a record low at 0.7% of GDP (compared with 1.4% as at the end of 2017), and the ratio of public debt to GDP dropped to 49.4% (vs. 50.7% as at the end of 2017).

Deficit and debt of the public finance sector
Results of the central budget (in PLN billion, by quarter) 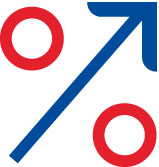 In 2018 the Monetary Policy Council (RPP) did not change NBP base interest rates. RPP indicated the absence of threats of inflation increases above the allowable bracket of deviations from the inflation target, limited growth in loans and investments, and the prospect of a slow-down in the global economy. As at the end of 2018 the Monetary Policy Council signalled that the base scenario for most members of RPP is to maintain interest rates at an unchanged level at least throughout 2019, and excluded the possibility of reducing them.